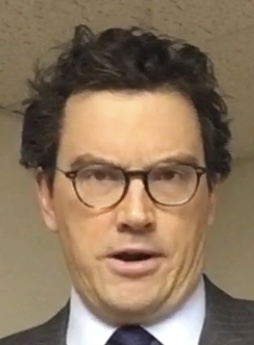 Like everyone else I’ve been under a lot of pressure lately and it seems like ain’t nothing going right. And I mean that literally! Democrats trying to steal this election with their crooked mail-in ballots, I’m unlawfully being forced to wear a mask in Home Depot, I haven’t had a match on Tinder in 6 months, and now I’m fighting a nasty case of the hooks on the golf course. There’s some irony in there for sure; a red blooded right handed American like myself, from the right side of town, who belongs to a right wing militia, who can’t keep his G damn golf ball and everything else in his life from going OB left.

I know, I know, control what you can control!! Well I may not be able to fix the politickin’ stuff without a civil war (that comes later) or force gals to dig my handlebar ‘stache and cauliflower ears… but my ball flight I should be able to correct. My playing partners tried to tell me I was overly aggressive in the downswing, tugging the handle and letting my chest open too quickly in transition. They told me to fix it by getting my shoulders and hips closed at impact but that only made the problem worse. Of course I’m smart enough to know my friends are a bunch of know nothin’ a-holes so if I want to get this fixed right quick, I needed to reach out to my local PGA professional, Randy Tims.

Randy is a real hoot. Guy always dresses off-white Puma pants and a mustard colored Regis Philbin golf shirt. “Dress like your favorite condiments I always say. Hellmann’s and Grey Poupon. I eve put that shit on flapjacks.” I told Randy to get serious and get me my banana slice back pronto. An open minded person would probably call Randy’s teaching methods “unconventional” but I’m more of a closed minded type and I found them semi-gay. Good on me though, because I was willing to give him a chance. For the better part of an hour Randy kept his nose within inches of my stink hole, with his hands holding my hips so he could fling them open as I swung. I worried the clenching would ruin it but Randy said it was good I was activating my glutes.

With Randy’s gentle hands my ball flight became a sight to see. Shot after shot I was crafting a gorgeously parabolic and almost unplayable ball flight, like a Scud missile heading right to the mountains of Tora Bora. At the end of the lesson Randy winked at me and said, “Sometimes to go right you gotta swing left, ok? Swing left all day long.” I’m not proud of myself but all the sudden I felt tricked, like I fell for some online clickbait that was an advertisement for AOC. Well this Homie don’t play that so I punched Randy square in the nose. No way in hell I’m swinging left. Not now not never.

Can’t believe I’m asking for guidance from a feller who’s probably part of the liberal media elite, but how’s about telling me how I could fix my swing the right way.

Ever Humble in Humble, TX

Dear Ever Humble in Humble,

Interesting question. I’d guess your path was severely in to out and Randy was just trying to reverse that (out to in, aka “swing left”) to get you that Ted Cruz shot shape you know and love. But if you don’t care for the solution he provided, lets examine some other choices.

Where does this leave us? Knowing your reaction to Randy I’m going to tread lightly here but maybe, just maybe the answer is some sort of compromise? It’s like that Maren Morris lady with the nice voice and skimpy belly shirts says… “why don’t you just meet me in the middle? In the middle. I’m losing my mind just a little.” Zero out your path. Play in the short grass. Straighten up and fly right.

Sometimes legends disappoint us. Check out our latest post at talkingtoafade.com (link in bio) #medaloffreedom @annikas59 @gary.player
Hey, remember when Pamela Anderson looked human? Remember “the Rachel?” How about when golfers decided the baggier the clothes, the better?
Yes, that’s former St. John’s basketball coach Lou Carnesecca, and we aren’t quite sure what he has to do with the Best Major Champions of the 1980s, but this is just how Greebytime’s brain works. Or doesn’t.
With all the talk about @brysondechambeau making courses obsolete, let's not forget about that thing between your ears. Check out our latest post called Head Games at www.talkingtoafade.com (link in bio)
Its @themasters week! So it felt only right to try and figure out who is the Best Masters Champion ... and spoiler alert, it’s NONE of these guys. Click the link in our bio or go directly to talkingtoafade.com
Its @themasters week! And it’s time to make our picks, or at least for Greebytime to do so on @draftkings. It’s tempting to take the #ThiccBoi @brysondechambeau but it’s not happening (which is probably good news for him). Read about who we are betting on at the link in our bio or at talkingtoafade.com
%d bloggers like this: