Since the beginning of 2020, I’ve had a nagging feeling that professional golf is in trouble.  Yes, despite the appearance of an embarrassment of young talent riches, I believe we are entering another dead zone like the early 1990s, with many potential torch bearers but no one quite good enough or consistent enough to shoulder the load for very long.

I’m aware we’ve had great play from JT and Rory, and a fun win by Adam Scott but it all feels flat.  Like instead of a nice hearty dinner we have been served an assortment of uninteresting breakfast cereals; all unsweetened and with the taste and texture of lukewarm oatmeal.  The best part so far was a hot stretch of play by Brendan Todd but it seems to have ended as fast as it came. I’m very familiar with that feeling but still color me disappointed, like the time I washed my first pair of $200 Diesel jeans and couldn’t pull them over my beefy thighs.
(Editor’s Note: Let it go Bobbycuts. Let it go.)

My sense is that golf is on a path to resemble professional poker, where overall skill is quite high but uniformly spread among a great number of people. To make my case, I have prepared a laundry list of disappointments, just as I did in high school with women who refused to date me. (Editor’s Note: See previous Editor’s Note.)

Tiger Woods.  Tiger isn’t playing Bay Hill this week and God knows when he will play again (he has to play before the Masters, right???).  He has offered up some decent play (sort of) but he’s made it very clear he is fragile and will struggle to stay loose 4 days in a row.  I predict a zero win season and perhaps only 1 more year before he hangs it up.

Phil Mickelson.  I knew it would be a rough one for Phil when he decided to skip Phoenix for that appearance fee money grab in Saudi Arabia. The Golf Gods frowned on this and will smite him with all the mighty power of Old Tom Morris’s Ginty of Lightning.

Jason Day.  Backstreet’s back all right, but JDay’s back is whack!  Thank you next says Ariana Grande.

Dustin Johnson.  Has anyone ever looked more bored playing golf?  This isn’t new of course but the fellow seems especially uninspired.  I almost said he should go back to blow and banging other people’s wives but that would be insensitive.
(EDITORS NOTE: ALLEGEDLY! THIS IS ALL ALLEGEDLY! )

Brooks “I’m a hot guy” Koepka.  Brooks is the perfect combination of John Wayne, Jake Ryan from Sixteen Candles and Garth Brook’s alter ego Chris Gaines.  He’d never be invited to join Smylie Kaufman’s Spring Break Crew but he wouldn’t give a fuck cuz he’d rather brood by himself at the squat rack or have photographers take pictures of Jena Sims straddling him on a beach (how hawt was that?? bbabbbaabboing).  But back to the golf… the problem is his messed up knee won’t be right for a long time and BK Smoove will struggle to regain his form.

Jordan Spieth.  I feel for Jordan and know he is doing everything he can to get back the magic.  He misses the cameras in his face so he can grimace after every shot and scold himself with a good “come on Jordan!” Oh yes there are a few examples of guys who could bring themselves back from the dead but the odds aren’t good and getting worse by the day.  That last win at Royal Birkdale was 2017, THE SAME YEAR THE SPRING BREAK CREW DISBANDED! I blame this on his too-attractive wife and the CURSE OF THE AFOREMENTIONED SMYLIE KAUFMAN.

Rickie Fowler.  Rickie is a great pro and has a fun game to watch.  But he’s like Freddie Couples Lite; half the size and half the wins.  Terrible tattoos and an even worse Cali accent. Stupid hairdos and an unconvincing glare.  You’re telling me that guy is scared of shanking one into Ricky’s dumb car? Guy glares at me like that and I’d put him in head first into a garbage can.  Here’s a hot tip, maybe he would win more if he didn’t spend 30 days a year shooting stupid commercials??  And while he’s at it maybe he should tell that Allison Stokke to hit the bricks.  She deserves someone older who is very self conscious about his fading looks. Someone perhaps much less gifted at golf and much less successful.  Perhaps someone who lives in Syracuse and is already happily married with two kids. She should do that. 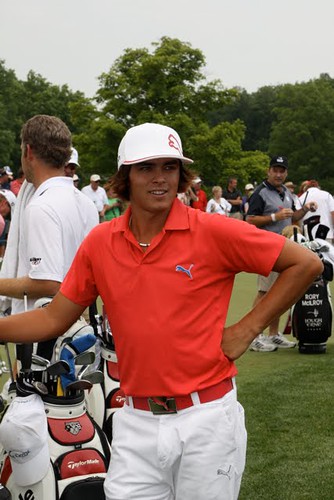 Bryson Dechambeau.  I still hold out hope for the mad scientist but there’s too much of the tinkerer in him to ever be great for long.  He was never meant to be the dominant force anyway; his role has always been clearly defined as the heel a la the WWF’s Leaping Lanny Poffo when he became “The Genius”.

Matt Wolfe. The youngest of swashbuckling young guns will win again some day but I believe it’s a case of too much too soon.  Same goes for Coach GG Swing Tips.  The Golf Gods shall humble thee, and humble thee swiftly and take away thy frankincense.

Zach Johnson, Bubba Watson, Charlie Hoffman. Damn, you boys got old quick!  I would have liked to blame it on PXG, Volvik, and Halo Neurostimulation (respectively) but I think it’s just those creaky bones and frayed nerves.  My bones are not old, by the way. I keep them young with ginkgo biloba, turmeric and a heaping spoonful of Organic Triple Fiber.  I advise those gentlemen to get off my lawn and do the same.

Justin Rose.  No one switches to Honma golf clubs without destroying their game.  No one.
(EDITORS NOTE: Rose just dumped Honma! )

Europeans.  Paul Azinger recently got in trouble for criticizing those fancy pants Euro bastards but I agree with him! When Lee Westwood and Graeme McDowell are still about the best you’ve got I’d say we have a problem.  Touchdown Tommy Fleetwood is a nice “young” player but his pants are too tight and his face is covered with those scraggly hairs. And that mop on his head! I won’t stand for it!!  Finally, to Francesco Molinari, Alex Noren, Bernd Weiesberger, Thomas Pieters, Tyrell Hatton, Ross Fisher, Nicholas Colsaerts, Eddie Pepperell, what the fook happened?? It’s like you guys were on that plane with Thorbjorn Olesen and blame yourselves for his issues with forcible touching.  Ok, pretend I’m Robin Williams and you are all Matt Damon… It’s not your fault.

Where does this leave us??  No one knows and more importantly I don’t think anyone really cares! Because even if the PGA Tour isn’t great, it’s good enough, right?  Has it ever been that great? I love it, but honestly I don’t know if it has. If you’re with me and ready for the fix then here it is….

Make the balls spin more again, reduce the head size of drivers, and reduce the trampoline effect on the faces.  Rolling everything back makes the game harder and less of a bomb and gouge affair. I guarantee the public would adjust quickly and we’d recalibrate our expectations for when guys are playing their tee shots.  As it is, I don’t really think we can adequately process the difference between a 300 yard bomb of old and one of Rory’s 380 yard missiles today. It’s more about the power of the swing and the sound at impact.

The final step might hurt a bit… I stand in favor of the Premier Golf League!  Yes, the PGL, which most likely will go nowhere! The reason I like it is the same reason why I imagine people like Nascar.  The fields are smaller so you get to know the players better and the team aspect means the guys will high five each other aggressively and smack each other on the buns and player wives will make out when the teams win.  We’d have limited edition jerseys to wear, there would likely be team coaches and ownership could rudely dump them or underperforming players every other week. Just think of the unlimited bits of drama that all the other major sports get to enjoy!!!

I realize that some of this piece might not seem completely fair but trust me when I say all the slander was necessary to prove my point!  Remember at the end of The Dead Zone, where Christopher Walken’s Johnny lays dying, satisfied that Stillson’s career is forever destroyed and the nuclear war he would have incited will not occur?? I’m Johnny, ok???  Sure, I haven’t stopped a nuclear war maybe I’ve saved you from watching the Barracuda Championship again and given you the gift of the 2021 PGL World Series Superbowl Invitational Classic. Thank you and have a good day.