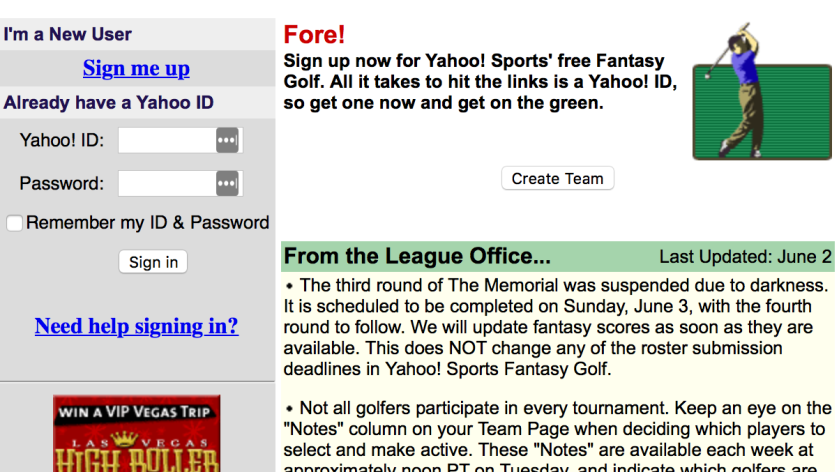 Full confession here – I am a diehard fantasy sports “enthusiast.” Long before this meant diving into Daily Fantasy (see: addiction, gambling), it was about playing season long challenges for basketball (my first entry), baseball, football (the prime meridian) and yes, golf.

I’m old enough that I played fantasy golf before they realized you had to put a cap on how many times you could choose a player in a season because otherwise, everybody took Tiger Woods and it essentially eliminated a full position on everyone’s roster. (That is, if everyone has the same player, then nobody does. Deep, right? Burn some incense and think about it.)

The general idea was fairly simple – it was ALL based on where they finished the tournament. The better a player’s score each round, the more points they scored in fantasy. That was it. You joined a league, and you could conceivably have payouts for each week and for the season.

At this point, AC would like to provide for the record that he finished a season in the top-100 worldwide for fantasy golf once. Back to things you care about.

Here’s a snapshot from the Wayback Machine from 2001. Isn’t she beautiful?

Alas, at some point a few years ago, fantasy golf just disappeared. It’s true that the PGA has its own version of fantasy golf – and I’ll take what I can get – but it’s hyper complicated. I’ve played it for years and I still don’t know what gets rewarded and what doesn’t. More importantly, when sites like ESPN, Yahoo and CBS don’t have a fantasy golf game, it essentially doesn’t exist.

We planned on doing a “one-and-done” game this year here at Talking To A Fade, and the only site that did it – again, the PGA – decided to can it for the year. We’re far too lazy to keep track of this ourselves, so we shelved the idea.

Who is to blame here? Well, I actually know the guy (whose name is actually Guy) who runs Yahoo Fantasy Sports (humblebrag…I guess?) and I asked him why fantasy golf went away, and that I’d loved it. His response?

Apparently, in the big scheme of things, not a lot of folks played fantasy golf and I suspect this shouldn’t really be a surprise to anyone. But here’s where I wonder – because Yahoo now DOES have a Daily Fantasy Sports (DFS) version of golf, as does DraftKings (something I know all too well). And this wouldn’t be the case if folks didn’t do it – in fact, DFS will fail if the site has to pay out more than they receive in entry fees. So folks are playing DAILY fantasy golf, just not season-long.

Can’t we do something about this? There’s an audience, but they just need that reward every day (or, in golf, every week). And that kind of sucks, man.

Because fantasy golf did what other fantasy sports have done to me – introduced me to players I’d never otherwise know. I remember discovering Stephen Ames (long before The Big Cat stole his soul in match play), and Jesper Parnevik before he introduced Elin Nordgren to the aforementioned Big Cat. I spent a long time trying to make sure I didn’t confuse Stuart Appleby with Robert Allenby. And I’ll never forget realizing Chris DiMarco was not only sponsored by, of all things, The Gap – but that he did that little takeaway where he looked back at the club before resetting and swinging full (something many golfers do today.) These are golfers that didn’t make many highlight packages on SportsCenter, and I would have never really known much about them – except for fantasy golf.

At this point, like so many others, you may envision me shaking a stick up at the sky, cursing the gods for not making the world exactly as I want it to be. And you’re not totally wrong in that portrayal. And I fully understand that there’s no way a product that doesn’t make money is going to thrive in a market for a company like Yahoo! that is suffering, or even at ESPN and CBS.

And honestly, DFS is now the way of the world. But there should be a happy medium for folks who want to take the longer view. Season long fantasy football hasn’t gone down with DFS, with the latter being much more of a supplement to those of us who just can’t get enough. Wouldn’t golf benefit from more engaged users?