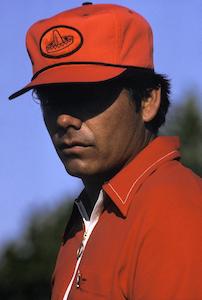 But we can’t compare our games to pro golfers, let’s be realistic. Sure, on Reddit, everybody drives it 300 yards, and on other golf message boards it seems like most folks are low single digit handicappers, but ALL of us have games that are far, far away from guys on the PGA Tour.

No, this quiz instead is to ask the following – you have to make a choice from the below wardrobe choices and ALWAYS wear it on course. That’s rounds with your regular group, your buddies from school, complete strangers, etc.

What do you choose?

There is a correct answer.

OK. Take a long look. What do you choose?

Justin Rose’s sunglasses: Congrats! You’re a nerd. Alas, this is not the right answer. These glasses are best used for competitive running. If you are also planning on doing the thing where you put them BEHIND your head on certain shots, you’re also disqualified.

Beau Hossler’s visor: We admit, the Tour Visor is kind of amusing. But it’s HUGE. And unless you have an insanely thick head of hair that yes, we’re envious of, it’s absurd. While it does protect your face from the sun, it also makes you look a bit like Beaker from the Muppets. Only like ten people in the world can pull this off, and Beau isn’t one of them. (However, Big Randy from No Laying Up IS one of them. Perhaps being 6’7″ unlocks the magic?)

We’re sorry, but this is still the wrong answer.

Bryson DeChambeau’s “ivy cap”:  Get out. Seriously, nobody would ever choose this. Even Bryson must have regrets about this (though probably not when he’s cashing his endorsement checks.) How can we say this confidently? Because when he’s not competing, Bryson looks like this:

Sure, he’s still probably talking here about some physics problem he actually doesn’t understand at all, or defending why it’s fine to play for a country that murders journalists, but he doesn’t look like he should retire the category of punchable faces. If you are ever tempted to buy one of those “ivy caps” (Hogan caps, raspberry berets, WHATEVER), seek help. And if someone buys you one for a gift, cut them out of your life.

Lee Trevino’s rope cap: Not going to lie, this was a trick entry. Because yes, rope caps are (somehow) back in fashion and nobody wore one better than The Merry Mex. But that’s the problem – you’re not going to look even a fraction of this cool with this cap. And if you choose this, you also have to wear it way up high on your head, as if you’re terrified of seeing the brim. It feels like a good choice, but sadly this is a choice only for hipsters. You’re not a hipster, right?

Bubba Watson’s shirt: This feels like an acceptable choice, right? We’ve seen more people buttoning their shirts on and off the course all the way to the top, though we will admit that we don’t know why. On the course, maybe it’s to protect against that nasty sunburn on the Adam’s apple area. But we’re sorry, it looks like you might be confused and think you’re at a meeting of the Quaker Friends. Golf is buttoned up enough already, AM I RIGHT? This isn’t the right choice.

Tom Kite’s straw hat: Yes, we could have chosen The Shark’s version of this, but damn look at that man. Tom Kite just had a special something, didn’t he? (Those glasses…my god.) The straw hat is an underrated wardrobe accessory, but it also looks too much like you should be putting a feather in the side of it and joining the Drama Club. They are also very easily crushable, which is not a good look. Hard pass.

Joel Dahmen’s bucket hat: Hey! You did it! This is, in fact, the correct choice. Yes, it looks … kind of sad. There’s no getting around the fact that a bucket hat can make you look a bit like Ned Ryerson from Groundhog Day (actually NOT wearing a bucket hat) or like a pre-dementia old man who wants to go fishing. We get it. But … it’s super functional, you don’t look like someone we want to avoid at all costs, and also … Joel Dahmen kind of rules. He runs super hot, apparently can drink with anyone, and has a fun game worth rooting for. This is the correct choice. Congratulations.